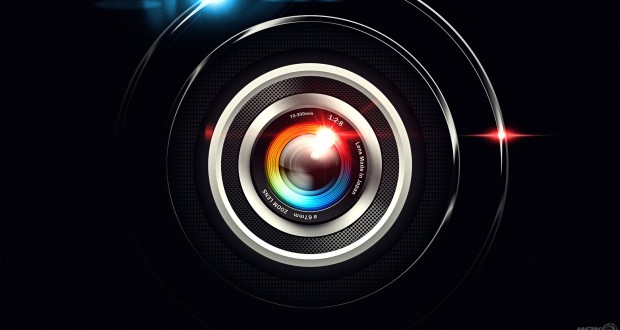 With the pre-eminence of GoPro cameras, drone manufacturers have had little choice but to make their platforms flexible enough to handle cameras from other brands. However, of recent something is changing all that, the 4K camera. Quadcopter manufacturers actually beat GoPro to the market with the introduction of quadcopter-compatible 4K cameras, and as such had little incentive to make their drones flexible enough to incorporate that from other brands including GoPro.

On the flip side of things, drone manufacturers who had introduced cameras to their platforms before GoPros caught on in the drone community, ignored the GoPro movement, and continued to provide custom built cameras on their platforms. Let’s look at some of the best quadcopters who for one reason or the other ignore commercially available cameras, and in so doing provide their quadcopters with built in cameras.

Low/Mid-end Quadcopters and Drones with Camera 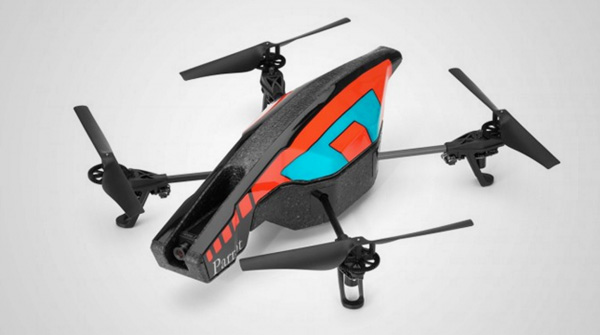 Parrot introduced the AR drone quadcopter in 2010, well before GoPro came on the drone-scene with Hero 2 in 2011. As a result, Parrot came up with its own solution for on-board photography and video, and they haven’t looked back. The parrot A.R. Drone quadcopter comes with a built-in camera integrated into its nose.

The camera for the A.R. Drone records video in HD 1280 x 720p, takes jpeg photos and is controlled via an app on a mobile device compatible with both IOS and Android. The quadcopter comes with its own built-in Wi-Fi for connectivity to the app. 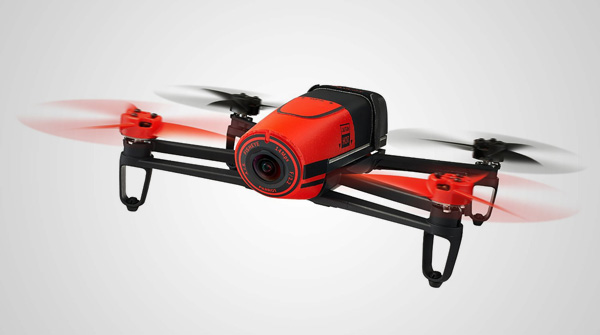 Parrot has never cared to allow their drones the flexibility of incorporating other cameras to be used on their quadcopter. And, with their newest drone, the Bebop this is no different.

The built-in camera on the Bebop, which has a 14 megapixel sensor, automatically starts recording upon take-off. The pilot can stop and start the camera mid-air, take pictures while recording video, or instruct the camera to take pictures every five seconds. The camera is full HD, and comes with 8 GB of flash recording.

The most remarkable aspect of the Bebop’s built-in camera, which is fixed, is its electronic functions of rotate, pan and tilting of the view, without actually moving the camera. This is because the Bebop comes with a fisheye lens that has a 180 degrees field of view, and the pilot has the option to choose which “slice” to view at any given time.

To get the most out of the Bebop’s video capabilities, it’s worth investing in the Sky Controller, which comes with its own Wi-Fi and gives the pilot joystick controllability of the Bebop. The Bebop has First Person View (FPV) connectivity. 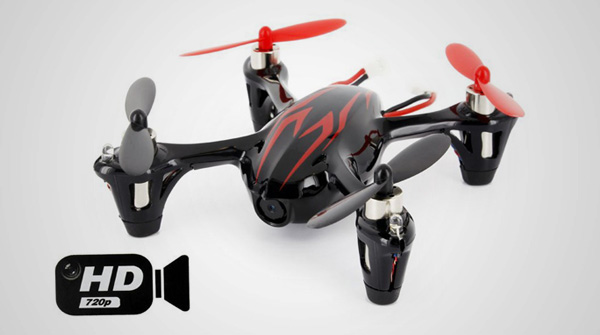 This is the smallest and least expensive in our list. The camera on the Hubsan X4 comes with a resolution of 2 megapixels, with 1280 x 720 HD. For video recording and downloading of pictures a micro SDHC card is required, which has to be purchased separately. The Hubsan X4 with HD camera is considered a great learning platform for would be aerial photographers and cinematographers. It is even reported to make a decent B-roll clip.

High-end Quadcopters and Drones with Camera 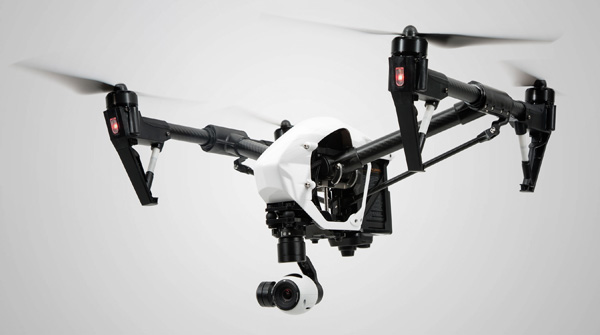 DJI completely flipped the script on their newest, latest and greatest quadcopter, the Inspire 1. Its light-weight carbon-fiber arms form an H that rises out of the field of view of the camera during flight.

The Inspire 1 comes with an integral camera that is built into a 3-axis removable gimbal, under-swung from the body. The camera gives 4K resolution, and can provide real-time HD downlink to mobile devices. The camera also takes 12 megapixel still images. The images and videos are recorded to an onboard 16 GB micro-SDHC/SDXC card. 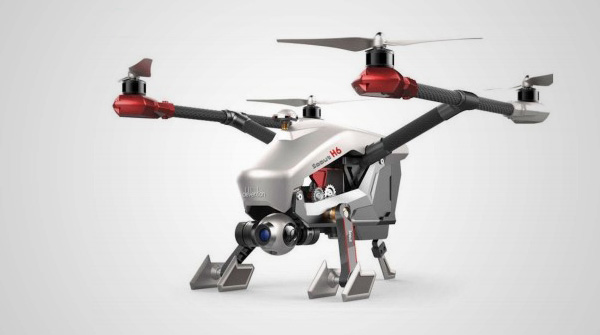 Walkera responded to the release of the DJI Inspire 1 with the Voyager 3, a sturdy looking quadcopter with an H-style chassis that also rotates above the fuselage during flight.

In the same vein as the Inspire 1, Walkera did not bother to make the camera mount compatible with third party cameras like the GoPro. The camera integral to the Voyager 3 is also 4K. At this resolution and level of quality, there is no competitive advantage to inviting GoPro and others to the party.

The camera is housed in a detachable 3-axes gimbal, which provides an unrestricted and uninterrupted 360 degree view. The legs of the quadcopter also retract during flight to aid this. 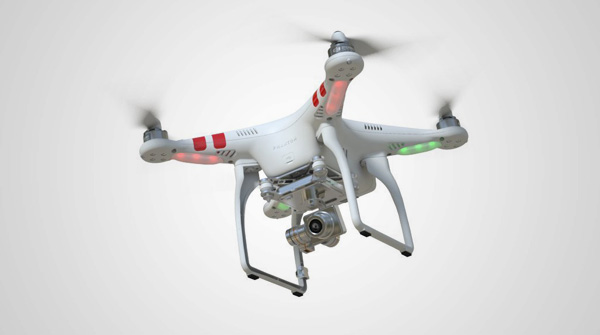 The new and much improved version 3.0 of Phantom 2 Vision+ features a more efficient motors, gimbal control dial, self-tightening props, new transmitter and other small improvements from the previous model.

The built-in camera which is controlled with the integrated 3-axis gimbal features a 1080p video at 30 fps or 720p at 60 fps. The camera also takes 14MP stills at maximum dimension of 4384 x 3288. The camera is controlled by an app (for iOS or Android device) via WiFi.

Summary Chart of The Best Quadcopters and Drones with Camera