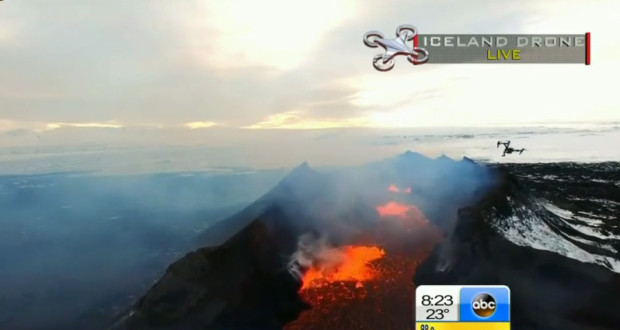 ‘Good Morning America’ controlled two DJI Inspire 1 drones to capture this amazing live footage of an erupting Bardarbunga volcano in Iceland. With commentary of Bjorn Oddson, a geophysicist from the Icelandic Civil Protection, two DJI Inspire 1 drones approach the crater and capture the process from incredible proximity of 120 meters. The volcano is located 40 km away from the crater which is surrounded by a 85 km lava field. The magma from the erupting volcano proceeds underground and bursts into a firewall which over time creates a crater through which the lava flows (the eruption has been in progress since August).

The video shows the boiling of the lava and circulation of toxic gases as well as outbursts of ash and steam as they are happening. The fact that humans cannot approach the crater due to the gases and the temperatures which climb up to 2100 Fahrenheit’s is nothing new. However, the drones technology marks a breakthrough in the scientific research of eruption processes, their changes over time and can bring forward understanding which has been unimaginable up to now and can become of determinant value in handling potential hazards. In addition to scientific perks of such technology, it is certainly an intoxicating opportunity to grab a glimpse of the astounding forces of nature at work from a perspective unrecorded so far.