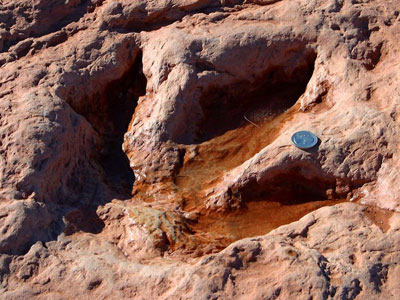 With so much chatter going on about drones and their commercial uses, a group of paleontologists have showed just how viable the technology is. Based in the University of Queensland, the group made use of a simple quadcopter to track dinosaur footprints along the Kimberley Coast. The tracks are said to be millions of years old, with some of them being discovered for the first time.

The drone has been equipped with a usual video camera, but the scientists are making use of special software to extract 3D images out of the video feed. The end result is a complete path that had been trodden on by sauropods and theropods. Additionally, the bird’s eye view gives the scientists an added advantage of identifying footprints hidden by jagged rock.

The live feed is also a plus for the researchers, once they have identified an area of interest, they can close in and obtain additional feed, from any altitude they desire. Needless to say, the details in this type of imagery make the drone an ideal candidate for exploration of historical sites. The plotted track also helps the scientists identify what activities were the dinosaurs involved in at that time, much like a CSI.

This is just one amongst a series of ways in which drones can help us rediscover our history. For example, scientists are using drones with LIDAR equipment to map previously unknown settlements. Drones are redefining how we conduct are studies in a more economical and efficient way. Previously, this type of equipment was mounted on airplanes and satellites, which sometimes went out of the budget for the studies. Drones are making sure that the cost of our advancement stays to a minimum. Soon we might see ground penetrating radar equipment being used to map ancient tunnels around the world.