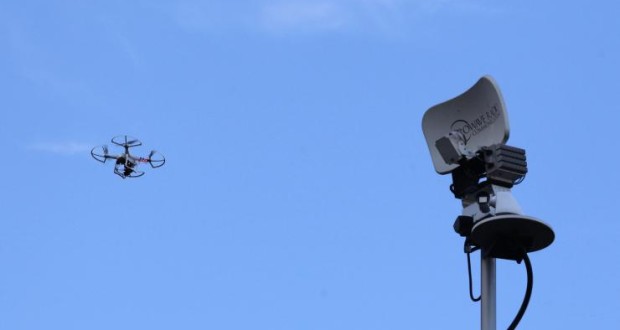 With the FAA still not ready to let commercial and civilian drones run rampant, Verizon has come up with a solution to monitor drone activity in US airspace. Verizon, the wireless communications service provider, has been in talks with NASA over using its phone towers to monitor the growing fleets of drones. Reports from the company indicate that Verizon and NASA had been at it since the past year to explore if the phone towers could communicate and thereby keep an eye on low-altitude UAVs. No wonder the FAA would not allow drones to soar too high, the government wants everything under surveillance.

The project is budgeted at $500,000 and is under development at the Ames Research Center. It is believed that NASA will begin its drone traffic control tests in Silicon Valley this summer. However, integrating the system with Verizon phone towers could take a while. However, once deployed the system would be able to collect data from, track, navigate and perform surveillance of drones in the US airspace. The deployment is set for 2017, with the finalization being completed by 2019.

NASA has even instigated a new UAS traffic management division, which should begin operations by 2019. NASA states that the new division would enable safe low-altitude drone flights in the US. The main aim of the governmental organization is to develop a geo-fencing system to keep drones away from sensitive locations, like the White House.

Consequently, the federal agency would like to exercise more control over the drones and decided when they can and cannot fly, which routes they can take and which drones would have priorities in congested airspace. As per the reports revealed, through the Freedom of Information Act, the purpose of the project is plain exploratory. The plan cannot be initiated without proper rules being defined by the FAA.

← Previous Must Watch: FPV Drone Racing Compilation
Next → Tax Evaders Watch out the Drones are Coming for You