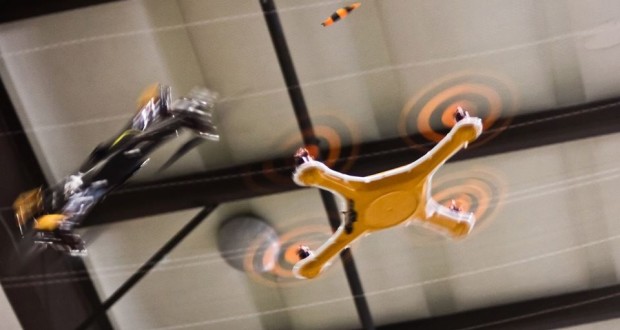 The market for personal drones has been growing exponentially, while also experiencing a shift from photography drones towards other applications. However, taking the lead are Racing Drones and Combat Drones. Large companies, like Parrot and DJI, are still focusing on photography drones, so the market for racing and battle drones is still open for startups. At the moment, however, individuals are using their homemade drones for these purposes.

However, a new player is looking to take advantage of this growing opportunity. Mark Cornblatt and his company Game of Drones manufacture airframes for such drones and are trying to make the most of this shift. The first problem that users encountered in battle drones was that drones are expensive and too fragile to be used in showdowns. Game of Drones took care of this problem, with the help of more durable airframes. Now 5-years into the business the company is finally looking forward to become the prime choice in an emerging drone market.

Unfortunately, the airframe was not the only problem. A number of drones are designed in a way that the components are integrated with each other. So if one component took a hit or failed, several others would take the damage as well. The costs of repairing a battle drone were to be kept at a minimum. According to Mr. Cornblatt, drones were made with the plans of commercial planes in mind, which are inherently designed to avoid crashing.

He and his team wanted drones to be like proper tools and the airframe would be the first component to be redesigned. They began testing a number of military grade ballistic materials, which could withstand collisions, while being light enough to fly. Game of Drones claims their airframes to be indestructible. This claim is backed by proof that the drones have been shot at, flown through fire and even crashed into walls at full speed, but they still seem to work.

← Previous Watch This Eagle Takes Down a Drone!
Next → Top 10 Quadcopters for Sale Right Now