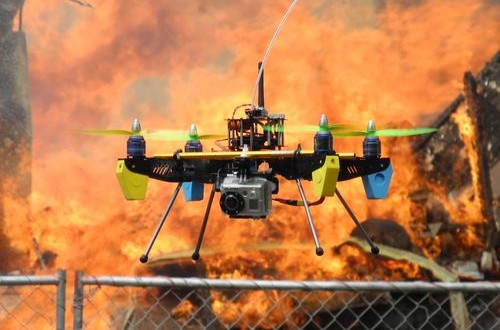 In Portland, Oregon, the Tualatin Valley Fire and Rescue team are asking the FAA if they can use drones to assist with firefighting. The drone lovers involved with The Roswell Flight Test Crew are also working with the crew by educating them and showing the benefits of using drones.

Meanwhile, firefighting officials in Arizona are busy working on a bill that would allow for drone use. Many others in the field are also looking at this technology as a valuable resource, and with good reason.

It’s reported by the National Fire Protection Association that in 2013 there were 1,140, 750 firefighters in the United States alone and over 700,000 were volunteer workers. Those numbers have continued to increase, and as so many people devote themselves to protecting the lives of others, they often endanger their own.

From the ground, firemen can only see their close surroundings. Unfortunately, if you take into consideration the amount of smoke and debris that they encounter, their range of vision becomes even more limited.

Drones can help take some of the guesswork out of firefighting, thus lowering the risks involved. Team members working against fires will have a much better idea of what’s going on because they will be able to communicate more effectively by exchanging detailed instructions and being easier to locate in case a rescue is needed.

With a clear, wide view of a dangerous area from above, they would be able to see people who were in need of help, know the areas to steer clear of, and could develop a stronger plan of action for entering and leaving an area. These types of advantages are exactly what firemen need to work more safely and productively.

Along with helping to save lives, the drones would also help to save money because pilots wouldn’t be needed to circle over fires as often for an aerial perspective of a situation.

Testing the ability of drones to withstand fires should prove to be an interesting experiment. Of course, it will still be up to the Federal Aviation Administration to decide if using drones will be acceptable during firefighting missions. If they are allowed, how they can be used and when it is necessary to use them must also be decided.

← Previous See the SKEYE: The World’s Smallest Quadcopter
Next → Amazon Wants Drone Deliveries to be as “common as the mail truck”