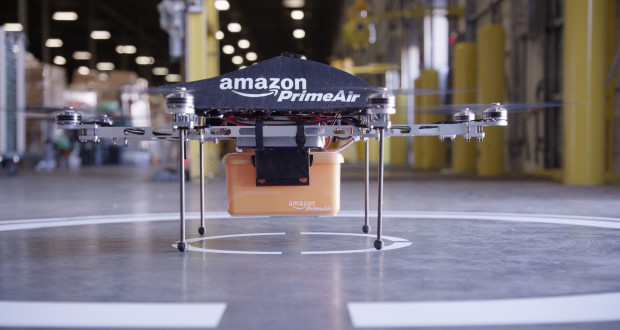 Amazon has been working for a while now to get the approval of the FAA for drone delivery and it seems that progress is being made. Amazon CEO, Jeff Bezos, has recently expressed his optimism towards the future of drone delivery, saying that it can one day be “as common as seeing a mail truck” when a drone brings orders to a customer’s address.

Amazon has been very serious about their intentions for using drones, testing at designated sites to ensure proper delivery and lower the chances of faulty deliveries. Bezo acknowledges that it will still be years between this idea being discussed and it becoming a reality due to regulation restrictions more than anything else, but he also spotlights the support and forward thinking of UK agencies when it comes to the technology.

The Prime Air webpage for the company mentions that they would like to be able to deliver packages by drones in 30 minutes. In the event that restrictions on drone usage are lifted, their customers will be treated to delivery speeds that would have been unheard of in the past. They also have an FAQ section with answers to the basic questions that consumers may have about the concept of delivering with UAVs.

The online retail business of Amazon is a powerhouse in the industry. Offering deals to more than 200 million people from all over the world, it is reported to have generated over 80 billion dollars in sales, and is one of the most recognizable brands globally.

Amidst all of the chatter about the risks of drones and the bad examples that irresponsible users have set, drones continue to prove themselves to be a necessary device as they show their ability to quickly deliver medications and assist with many other high-priority tasks.

We can only imagine the effect that drone deliveries could have on both big and small businesses. Needed products can easily and quickly be supplied and the overall cost of traditional delivery methods could also be cut using this innovative technology.