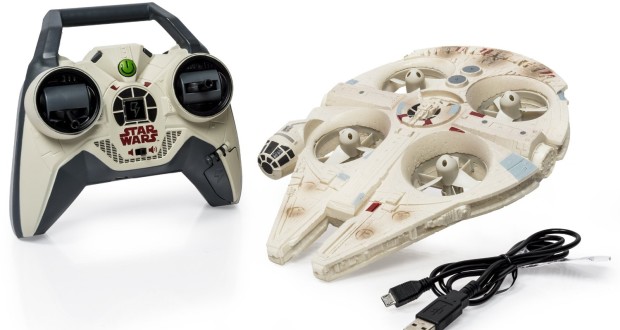 The Millennium Falcon Quad by Air Hogs is expected to bring in much business this upcoming holiday season. As of now, it’s available to purchase from a number of sellers. Air Hogs has combined a winning formula of a household brand and a popular entertainment franchise. Their company is one that specializes in remote controlled toys and you can buy their products at just about any major retailer that sells similar items. They are very current on what’s popular, and always have some very cool toys to offer.

The growing popularity of drones obviously hasn’t missed their radar either. At the same time, the Star Wars films have attracted a very loyal and dedicated fan base that includes all ages. Star Wars enthusiasts also pride themselves on collecting memorabilia and keeping up with the many details of the Star Wars series.

The Millennium Falcon shows proper respect to the film and the fans through its indestructible creation. Along with its striking resemblance, it has entertaining sounds and LED lights that does justice to the original, well-known ship. Constructed for an optimal flight experience, the design covers the 4 rotors it uses to operate.  It also features 2.4 Ghz, so it can be interactively controlled from a distance up to 200 feet.  The drone can be used both inside and outdoors and needs 6 AA batteries to power it. The description states that the toy is ideal for anyone aged 8 and above. Of course, children won’t be the only ones in line for this drone.

This great gadget isn’t the only drone to be offered by Air Hogs. Another example would be their Altitude Video Drone. Also able to be used by the age 8+ crowd, this toy can take videos indoors and in high quality. Much like the UAVs made for adults, it allows kids to experience the fun of recording and watching footage taken from above.

Remember when YouTuber, Olivier C, created his own Millennium Falcon drone, as well? People were so intrigued, the video went viral. This further supports the idea that the consumer list is sure to be long for a more compact, durable, and mass-produced version by a big name brand.

← Previous We Love Lily, and There Are Many Reasons Why
Next → Awesome Drones and Quadcopters Wallpapers