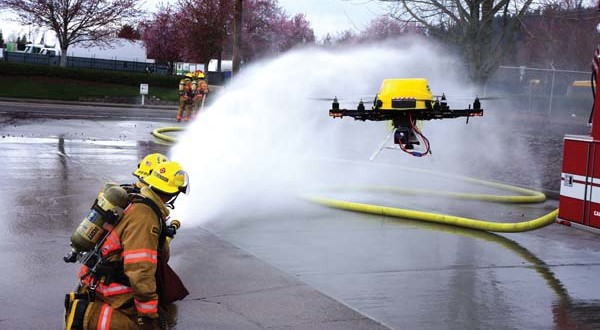 It seems as though the efforts of the Minnesota fire chief have paid off, as the Virginia fire department takes to the skies as the first step in controlling a fire. The Bedford fire department has purchased its very first drone to allow firefighters to get an aerial view. Additionally, the drone is the departments only hope for a quick rescue in hard to reach locations. The first lieutenant of the department, Matt Scott, stated that the drone can reach locations in minutes, where it would take the truck hours.

While the new equipment has been in use for about a week only, it has already been called in twice for search operations in rugged terrain. The first time it was called in at James River to search for missing boaters. The second time it was used to scale the Blue Ridge Mountains to find a missing hiker.

The second operation was a little more difficult, even for the drone considering the lack of equipment it employed. The hiker was asked to hear for the drone and relay where the noise was coming from, so her location can be found. The task would have been much easier, if the drone had sensitive heat sensors or at least a GPS, which could have coordinated with the hiker’s phone.

The department stated that for now it only plans to use the drones in hazardous situations, like brush fires or chemical leaks. The department is working in a very limited circle to just reduce the risk to firefighters. However, the department should seriously consider getting ad-ons for the drone to make their rescue efforts more effective. Their efforts are another addition to the long list of good possibilities that can come from the commercial use of drones. Something that the FAA should give a lot of thought to.